Last weekend we operated the H26 HELVETIA HF Contest. We prepared everything in advance so this was maybe the first time we didn’t have to hurry before the contest 😛 We also organised enough food this time 😉 At 10 o’clock we met us (HB9ELV Chris, HB9EMP Mischa and HB9EPW Wernie) at our  clubstation to finish the last important things and discussed a little bit how we proceed in the next 24 hours. Last year we had a big mess with our power generator but since the last CQWW SSB, we have a new reliable one which was already a couple of times 48 hours in non – stop operation. So this time we were pretty sure that everything will work… Last CQWW WPX the propagations were absolutely fantastic so we were hoping that the bands will be open again, but we knew that the last days some geomagnetic storms were ongoing and that we might have no luck.

Chris HB9ELV started at 15.00 HB time. We had good QSO rates on 40m and 15m. 10m was mostly closed on Saturday, also on 20m, 80m and 160m we couldn’t log many stations during Saturday afternoon/evening. At about 23.30 to 03.00 20m opened up into USA and we improved our rates again. The night in general was nice, the last couple of contest we always a bit out of luck during the night hours. Steve HB3YYD came early in the morning and  worked on our points – Thank you! On Sunday morning at about 6.00 everything seemed to be close. We were hoping to catch JA on 15m and 10m but in fact we couldn’t reach anything, (ok some were around but not as many as we are used to 😉 ). The propagations were really bad. At 10.30 20m was a bit workable. Later during the day 10m was also open and we could reached South America /Africa. But in general only 40m liked us 😉 But as we heared from other participating stations they also had their problems with the bands..

Despite of all the bad impressions we worked 68 countries and logged 1085 QSO’s (170 more than last year). This results in a total score of 447’108 points (110’000 more than last year). What is nice is the fact that we worked 25 cantons on 40m! Only Geneva was missing at the end. We had the feeling that more swiss stations were around this year – nice! 33.5% of the QSO’s went to USA. It is always a pleasure to work you guys. Also some exotic ones like St. Lucia/Trinidad etc.. found the way to us 🙂

As we announced in advance we improved our antenna system. On our new tower we installed two 5-element 20m monobanders and switched them together with a stackmatch (see picture below). Fun! During the full weekend we had to fight with the wind, at some places in Switzerland it peaked the 250 km/h  mark, so we were lucky that everything is still alive 🙂 But we had some shaky moments for sure! 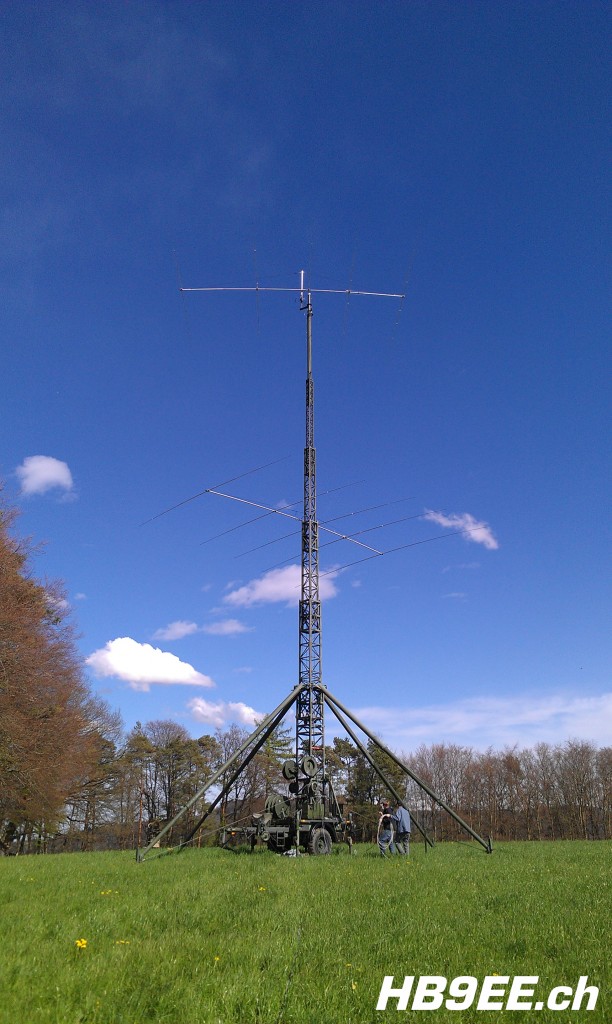 In general we are happy with this result, even the propagations were not with us we could improve this year our result again! It seems that we are again on a top positions if we compare with some others 🙂

Thanks to everybody how supported and visited us! Another special thanks goes again to Peter HB9EPR who spent hours with us to build up everything – great job!

This entry was posted in Contest. Bookmark the permalink.

This site uses Akismet to reduce spam. Learn how your comment data is processed.